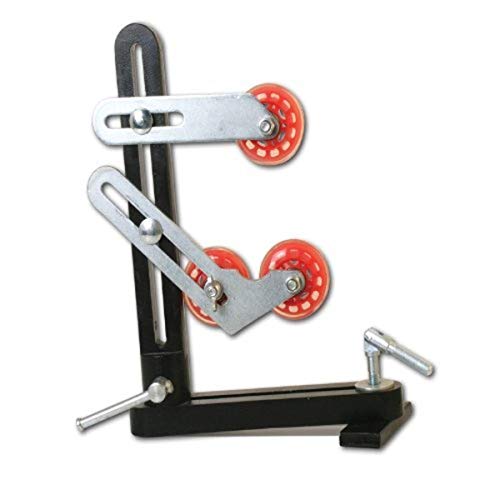 A steady rest is a device that attaches to your lathe bed and helps stabilize the blank for turning. In this article, we go over the best ones you can get – or make yourself.

Why a Steady Rest?

Let’s say you are turning a 30″ x 1″ broom handle. If you place that broom handle between centers, and you try to turn it, it will start to vibrate and actually bend away from your turning gouge.

Although steady rests were originally developed to deal with long spindles (to control whip flex along their length), the ones below represent designs well suited for hollow forms, though most are also adequate for spindle work.

Steady rests are almost a necessity when engaging in the deep hollowing of long or large-diameter thin-walled forms. Even on smaller forms, hollowing tools can generate substantial forces (sideways, as well as during a catch), and a steady rest not only will assist in stabilizing sidewalls of the form, but help prevent the hollow form from being levered off its mount by the hollowing tool.

See pictures of a steady rest in its natural habitat – Bill Grumbine’s woodshop.

Generally, steady rests are expensive. This is why there are a lot of DIY options out there.

These are the two most well-known versions.

The original guide on making a steady rest out of plywood and rollerblade wheels has been posted a while ago on American Woodturners. It has seen several takes since, and the best one yet is written by Ray Lanham. Get it here.

Here’s a great video from Stephen Ogle about making one:

The other version, courtesy of Herman DeVries, uses three cross-arms of either wood or steel (the lower serving as the mounting base), 3/4 or 1-inch threaded rods as posts, and rollerblade or scooter wheels attached to the middle and upper cross-arms. Photos and instructions can be found on Herm’s website.

These are very effective and relatively inexpensive steady rests for hollowing, and my version, using all bolt-together metal parts available from Home Depot, has served me very well.

This one is a bit small and not as sturdy as three-way or four-way steady rests in the form of a ring, but it gets the job done, and you can use bigger screws to mount it on a full-size lathe.

This one is done similarly to the others in this list, but it’s pretty sturdy, is made of metal, and allows for different positions, like, for example, from the sides. Plut it’s not as expensive. If you’re not looking to make one yourself, this should be the best choice.

Ready Made: Other Choices

These have long been some of the very best commercially available steady rests for large faceplate work, and have a loyal following. John’s standard version uses three length-adjustable arms (though additional arms can be provided on a custom basis) mounted 120 degrees apart to a wide flat ring of steel. Internal capacity, with the arms, fully withdrawn, ranges from 10 inches up to 22inches. A semi-soft plastic roller is fitted to the end of each arm. These steady rests, like most of the other commercial offerings, described here, are sturdy and well-manufactured items that likely will outlast even a very young owner.

Available direct from John Nichols. Unfortunately, these have been discontinued. Try to find one used.

Availability of these is somewhat questionable(the company has been up for sale for quite some time), but is still shown on the Serious Lathe Web site. A solid competitor to the Nichols, the serious Lathe Steady rest is a slightly more refined, but essentially similar design. Usually provided with either three or four arms, the arms can be locked into position anywhere around the ring. Locking is solid, but the adjustment is slightly awkward as positioning must be manually maintained until locked in place. More of those ubiquitous, but effective roller blade wheels are fitted at the end of the arms. Usual internal capacities were 12, 14, and 18 inches in diameter. The mount, while very stable, results in more loss of capacity (i.e., it takes up more space above the bed), than some of the alternatives, especially the Clark.

If the John Nichols Steady Rest can be characterized as the Hummer H1 of steady rests, and the Serious Lathe the Mercedes G500 luxury SUV, then the Clark is surely the Porsche Turbo. This is a beautifully designed and executed steady rest which I believe presently represents the state of the art in steady rests. Available in custom, single size, configurations suitable for lathes with anything from 8-inch to 48-inch swing, the most interesting(and for me desirable) model is called the Multi-Steady.

These Multi-Steadyscome configured with tubes to place three round steel arms at the appropriate points for either two or three different swings, and have interchangeable attachment and alignment plates to accommodate any size bed. Thus a single steady can be easily interchanged between lathes of say 16 (e.g., DVR orStubby), 20 (e.g., Powermatic or General), and 24-inch (e.g., Oneway Nichols) swing.

Mine is capable of adjusting for projects anywhere from 1/2inch to 23 inches in diameter (you need to substitute smaller roller skate wheels to attain the maximal capacity). The main body of the steady uses dual rings, a wide center band surrounded by an outer stabilizing ring, both of which make up the upper 7/8 of the steady rest (the bottom 1/8 is a flat section which mates to the bed and results in almost no loss from the full swing of the lathe.

The machining and welding are good, the Ferrari red powder coat paint (you can specify other colors) and stainless steel arms are attractive and durable, and the performance is as good as one can get all at a price that is comparable to its competitors. I will offer a detailed discussion of this outstanding steady rest as part of the future full review of the Clark Hollowing System.

Available direct from Keith Clark at his “The OKSpin Doctor” website.

This is manufactured by the same folks who make the well-regarded VacuuMasterspindle mount vacuum adapter and related accessories. It is a very expensive (approximately $750) custom-made steady rest which is notable for its very thick, large ring being made of aluminum (which surely makes it lighter than the 70-pound Clark steady).

The arms, like with the Clark Steady Rest, pass through the body of the steady restring, ensures consistent and stable alignment. It uses small planetary wheels (they look like roller skate wheels) for contact with the wood. Good photos of this steady in use can be found at Bill Grumbine’s Website: http://www.enter.net/~ultradad/urn.html.

I haven’t used this steady rest, but my greatest concern about it based on photos is that the mounting base while appearing very sturdy, is tall and causes one to lose several inches of potential swing. Perhaps a minimal problem on very large lathes, but a serious drawback for lathes of modest 16or 20-inch swing.

One point to keep in mind is that some laser-guided allowing systems locate their laser mounting bar directly at the 12 o’clock position over the workpiece. This is exactly where many steady rests place their upper wheel.

If you have such a laser guidance system or are thinking about obtaining one, you may want to select a steady rest that has movable arms (such as the Serious Lathe), or from a manufacturer who offers a choice of arm location (e.g, Keith Clark andJohn Nichols).

This review of steady rests by Lyn J. Mangiameli was initially published in More Woodturning magazine, issue of December 2004.

The first thing Vince created was a maple pendant with a five-leaf clover for his wife. He has been a woodturning enthusiast ever since he discovered the craft.